Jerry Bush is an accomplished steelhead fisherman and author from western Pennsylvania.

The fight of any fish is under-appreciated unless the event occurs while the creature is affixed to the business end of a rod and reel. At least that’s my take. It’s imperative that regardless what species of fish is being targeted, the fish must be coaxed first to the hook. 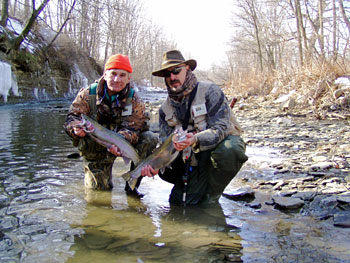 Speaking of fight, no freshwater fish is more capable of battle than the mighty steelhead residing six months of the year in Pennsylvania’s limestone tributaries to Lake Erie. Pound for pound, I’ll pit the fight offered by a fresh steelhead against any fish, and when it comes to steelhead in numbers, I’ll pit the fish inhabiting Pennsylvania’s tributaries from mid-September through mid-April against fish in nearly every other waterway in the world.

In just a couple paragraphs we’ve established some important facts. There are many, hard-fighting fish in Lake Erie’s tributaries. They are present during autumn, winter and spring, but their presence is worthless to the angler if the fish can’t be lured to bite.

Let’s quit monkeying around and put those steelies on the hook. A long, flexible noodle-rod topped with a quality spinning reel will do wonders to help the angler win the battle. Typical spinners commonly used for Keystone State trout, such as Mepps, Blue Fox and Vibrax have proven attractive to these hard-fighting fish.

Novice steelhead anglers might be surprised to discover even tiny hooks hold up well during the fight, so long as a flexible rod is involved in the fight. Go small, confidently knowing many a steelie has succumbed to fly-fishermen using flies manufactured with the tiniest hooks.

Speaking of fly-fishing, there is no better steelhead lure than the ball of yarn fly-fishers call sucker spawn. Fly-fishermen usually desire to perfectly imitate natural bait, but this imitation is slightly unique to fly-fishing enthusiasts because it isn’t intended to perfectly match anything. In fact sucker spawn often works best when presented in bold, unorthodox colors that purposely contradict the colors of natural bait. My theory is this bait can be so obtrusive and out of place it literally aggravates the fish and triggers an attack response. How else would anyone explain the numbers of steelhead hooked on sucker spawn tied in colors such as electric blue, lime green, and sunburst yellow? Heck, sometimes a combination of fluorescent colors works best to lure steelies.

Of course sucker spawn tied in natural colors such as black, white, pink, orange, and red often works well. Be wise enough to try other flies as well. Favorites include Wooly-buggers, Egg-sucking leeches, and Shrimp spey. 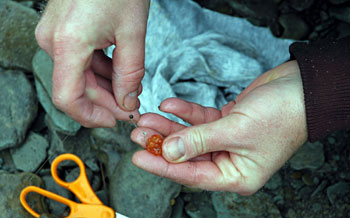 Skein (numerous eggs wrapped in thin netting) is at least arguably the most popular natural bait used in these waters by traditional spinning rod enthusiasts. The reason for its popularity is simple enough to appreciate. It works!

Take note if you plan to dangle skein. All egg sacs are not equal. Believe it or not, there are differences in quality. Most of the local bait shops will advise anglers of which eggs are proving most successful at any given time. Expect to pay a bit more for the baits that are most productive, but if you’ve made the effort to travel to Lake Erie for a steelhead fishing trip, this is not one of the items to fret over and save a buck on. Take the local shop owner’s advice. He or she has everything to gain by helping you enjoy a successful outing, which assures you will either return or you will recommend his services to others in the future.

Many anglers swear by minnows, but in my opinion grubs are more desirable natural bait, especially when targeting steelhead inhabiting some of the characteristically deep, limestone pools within the tributary. Attach a grub to a lead head and marabou tail jig, manufactured with a light wire hook. Then dangle the offering below a small bobber so it is suspended about mid-depth in any pool. 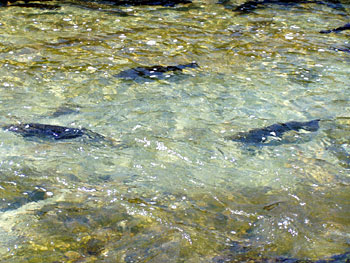 Presentation is everything when fishing the tributaries. It is best to experiment a bit with weight to perfect the drift, finding the buoyancy that places the lure in the strike zone. More often than not, it is desirable for the bait to move at a leisurely pace, hovering just above the creek bottom. Observe debris as it flows downstream and get the offering to match that rate of drift.

If the steelhead you are targeting is not chrome colored (signaling it has only recently entered from the great lake), you can bet the fish has seen many lures over the course of a several weeks. Tempting long-time residents might require creativity and thinking outside the box.

I once caught an eight-pound hen that had been ignoring everything I threw at her. I literally bounced flies off the creature’s nose and yet couldn’t get it to cooperate. Eventually the fish attacked a black wooly-bugger, and the only thing I altered was the presentation.

Instead of allowing the lure to drift downstream, I first cast downstream and jerked the fly upstream and right past the fish’s head. When I twitched the lure about a foot in front of her face, she fiercely attacked. Apparently the plump female hadn’t seen that particular presentation (or forgot she had), and assumed only natural bait would move against the current. Obviously I don’t know for certain what the fish was thinking, but regardless it worked.

If you’re ready to enjoy some of the finest fishing in the state, take a trip to Lake Erie’s tributaries, anytime from mid-September through mid-April. You will likely discover why anglers fly in from as far away as Germany to participate. For more information contact the Erie Visitor’s Bureau at www.visiteriepa.com or call toll free 1-800-524-ERIE (3743).