Charlie R. Meck, a lifelong Pennsylvania resident and the author of several successful books on fly-fishing, has fished virtually every trout stream in the state of Pennsylvania. 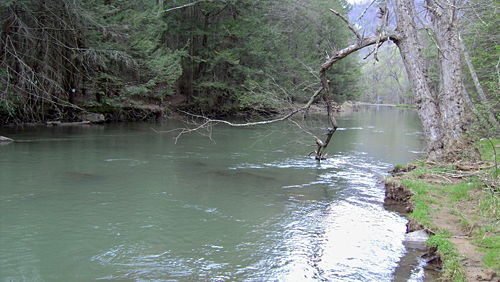 What qualities designate a trout stream as a top one? Does it have to hold some great hatches? Are the hatches heavy and numerous? What about trout? Does it hold a good wild trout population? And is there plenty of open water? What good is a highly productive trout stream with great hatches if the angler has no access? And what about water temperatures? Are high temperatures in mid summer below or just slightly above 70 degrees? Some of Pennsylvania’s better trout streams are limestone and contain moderate stream temperatures much of the year. Other streams like the lower Bald Eagle Creek in central Pennsylvania boast large spring fed tributaries that cool the mainstem. All of these components help produce a top stream. Look at these criteria and you’ll easily see that Pennsylvania holds a surprisingly high number of top notch trout streams. Let’s examine a few and see what makes them so special and also what problems confront some of them.

Penns Creek
Penns Creek deservedly ranges near the top of the list of best fishing waters. I place it there because of its abundance of great hatches throughout the year. In early spring you’ll find hatches like the Grannom caddisfly; mayflies like Little Blue-winged Olives, Blue Quills and Hendricksons emerge for an almost unendingly supply of food.

But the most spectacular hatches appear on Penns near the end of May. And this is a time I avoid the stream and its heavy angling crowd. The behemoth Green Drakes brings hordes of matching-the-hatch anglers to this central Pennsylvania stream. Hours before the dusk-appearing hatch occurs anglers take up positions, tie on their favorite patterns and wait. And they wait and wait. The hatch and spinner fall occur around 8:30 or 9 p.m. Often the large drake hatch is accompanied by a smaller but evidently better tasting Sulphur hatch. Trout often prefer to eat the size 16 yellow-bellied Sulphur over the size 8 cream-bellied Green Drake. The 100- to 150-foot wide limestone stream holds great Blue-winged Olive Duns in June and July. Slate Drakes can be an important hatch to copy (Drakes appear in late May and early June, and again in September).

But, often in late June, July, and August those parts of Penns not influenced by cold springs warm into the high 70s and often near 80 degrees. That’s no time to fish this stream. Avoid the stream on those hot days of summer otherwise you’ll uncaringly kill trout.

Paul Weamer and Jonas Price are both fly shop managers and both spend hours each day on or near the stream. Jonas’ shop, the Feathered Hook in Coburn is a destination shop.

Fishing Creek
Just to the north 30 miles appears another topnotch trout stream. This too holds many hatches and this too is a limestone stream. Locals call it Big Fishing Creek, near Lamar. One mile upstream from Lamar, the stream flows through a valley called the narrows by locals. The state has placed special regulations on the creek.

Big Fishing Creek experiences heavy angling crowds, especially when a notable hatch appears. You might want to avoid some of the more spectacular hatches. The stream below Lamar is significantly larger and holds a lot of June and July Blue-winged Olives.

Little Junaita River (LJR)
No list of top trout waters would be complete without adding the Little Juniata River to it. The LJR flows through Tyrone in Blair County. Below that town a good number of limestone springs influence the water temperature and qulity of this highly-touted trout river.

Fishing the river is best from just below Tyrone downriver about 15 miles to the LJR’s juncture with the Frankstown Branch. The river has special regulations and is heavy and can be treacherous wading.

The LJR however, has experienced many many years of catastrophic pollution events. First, before the 1970s the river continuously suffered from upriver pollutants that produced tannic like water. About 1970 the river cleared noticeably, had some hefty trout, but still had a questionable substrate. In 1972 the 15 inches of rain from Hurricane Agnes deluged the river and washed away much of the substrate pollutants. The high water also washed downriver thousands of heavy trout from mostly private Spruce Creek.

The LJR has intermittently held fantastic Green Drake hatches and a continuous Sulphur. The Sulphur first emerges around May 8 and continues to appears for a good month. That specific hatch brings hordes of fly fishers to the water because the hatch is so easy to meet. Recently I attempted to fish a section at the lower end of the river and left before I even began because I encountered 21 anglers fishing a spot that 20 years ago I would have had to myself.

One of the best hatches on the river is the Grannom caddisfly which first appears in mid-April. You’ll often face two problems when fishing this early season down-wing hatch. First, high water, and second, too many anglers, may prevent you from fishing.

Spring Creek
One of the late legends in fly fishing was the late George Harvey of State College. For many years if you wanted to locate George all you had to do was to fish nearby Spring Creek. George fished that water for years and had plenty of success.

Spring flows from State College to Milesburg. That 15-mile section hold a spectacular Sulphur hatch, a respectable Trico spinner fall, and plenty of Little Blue-winged Olives. At Milesburg Spring the enters lower Bald Eagle Creek. Above Wingate the Bald Eagle in late spring evolves into a marginal put-and-take trout stream. But, when it picks up Spring Creek’s cool water flow it again becomes a dynamic trout stream. The lower Bald Eagle Creek enters Sayer Lake (there are other names for this lake) about 5 miles below Milesburg.

Spring Creek has suffered from chemical spills similar to the Little Juniata River. But that section of Spring between Shilo Road and Milesburg, about a 12-mile stretch, holds plenty of wild brown trout and some respectable hatches. Hatches are less occurring than on some of the other top waters. But, it boasts a plentiful Sulphur hatch in late May, Little Blue-winged Olives in March and April and September and October.

Are these the only top trout streams in Pennsylvania? Definitely not! Others like Yellow Creek north of Bedford, the Lehigh River near Lehighton, the Delaware River which forms the eastern boundary of the state, the Clarion River at Johnsonburg and of course the Yellow Breeches near Boiling Springs also boast a good population of hefty trout. The Delaware, especially without the benefit of a hatch, can be unforgiving; even with a hatch it can be frustrating. The Yellow Breeches holds possibly the best White Fly in late August of any trout stream in the state.

Does your favorite Pennsylvania trout stream hold plenty of spectacular hatches, a good population of wild trout, access and plenty of cool water? Then try one of Pennsylvania’s top trout streams. But, hatches often brings plenty of fly fishers, so be adequately prepared to fish with plenty of other anglers close by.