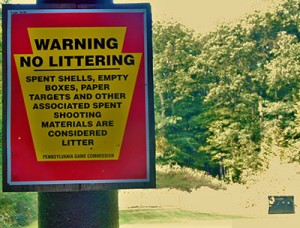 Firearm-related fatalities in the U.S. have been decreasing consistently since record-keeping began in 1903. It’s a record that has continually been improved upon over the years.

As firearms’ safety education programs have increased, the number of unintentional firearm-related fatalities have decreased. This is also reflected in the reduced number of hunting related incidents as well.

The vast majority of those who hunt and shoot recreationally have a keen sense of firearm safety. However there’s an area of concern that is often overlooked, and that is shooting ranges.

While public and private ranges are used year round, from now until the end of the big game seasons, shooting facilities will see increased usage. And that’s great.

However, being “safe on the range” is based on the assumption that everyone shooting there is on the same page. But that’s not always the case.

At every range shooting etiquette begins when approaching or leaving the area or facility. Firearms should be cased. Or when openly carried the firearm(s) action should be open when arriving or departing the range.

When visiting a shooting range, firearms should always be kept unloaded. They should be loaded only when the shooter is in position on the firing line.

Safety cannot be left to chance! Remember, a range is only as safe as the manner in which it is being used, and proper gun handling is of primary importance.

The first rule of firearm safety is: Always point the muzzle in a safe direction. At the same time keep your finger off the trigger and outside the trigger guard until you have made a conscious decision to do so.

It may sound simple, and it is, but there are times when some “forget”. Don’t let that happen.

When on the range, keep the action of the firearm open and unloaded until you are ready to begin shooting. This should only occur when the shooter is in position on the firing line and the range has been cleared for live firing.

It may seem obvious, but it is important to know and understand how the firearm being shot operates. After all, there are many types of firearms that seem to operate in a similar manner yet can be different in many ways.

Also be sure the ammunition and firearm are compatible. Carry only the ammunition that is to be used in a particular firearm. If multiple firearms are being used, when shooting has been completed, store that firearm and its ammunition before shooting the next one.

Be absolutely sure of the target and what is beyond it. Before shooting, be mindful of adjacent areas and act accordingly.

Safety equipment is a must. Wear ear and eye protection. Remember the loss of either one can’t be replaced. Protect yourself accordingly. 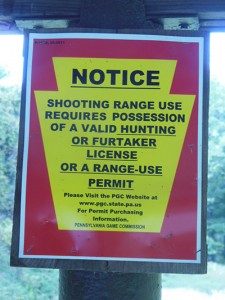 Be aware that certain circumstances may require additional rules. Private ranges often demand those who use their facilities to adhere to specific guidelines. Know, understand, and conform to the rules.

Public ranges such as those provided for use by the PA Game Commission have range rules posted at their facilities. Read and understand them. Keep in mind that PGC shooting ranges are monitored and require those shooting there to have a hunting license or a range permit.

Before going downrange to put up a target, be certain everyone agrees that the range is clear.

NEVER handle any firearm or stand at the firing line where firearms are present while others are downrange.

A good rule of thumb is that when there are individuals downrange, stand behind the shooting bench. Don’t touch anything related to the firearm – period.

After everyone has removed themselves from the area between the shooting benches and the backstop, then and only then can firearms be handled.

When everyone on the firing line is in agreement, then shooting can begin again.

If you bring it to the range, then take it home. In other words, clean up after yourself. That means retrieving spent cartridges, targets, and anything else that constitutes being litter.

The expression “safety is no accident” implies the necessity of planning. This plan is both a formal process that results in an atmosphere of safety for yourself and others around you.

Safe shooting depends on you, and others around you. Be safe, and have fun.