Award-winning outdoors writer Doyle Dietz contributes to several state and national magazines and is host of “Experience The Outdoors” on radio stations WMGH 105.5-FM and WLSH 1414-AM.

Aggressive Tactics Can be Rewarding in Bagging a Late-Season Gobbler

Now is the time when things start to get personal between a hunter and that gobbler who has been elusive over the first three weeks of the season. 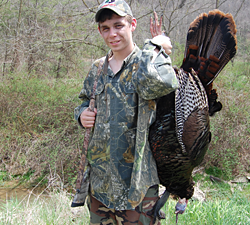 For many turkey hunters, there is a heightened thrill to the accomplishment of taking a gobbler when it is a specific bird that has been targeted all spring. From now until the Thursday, May 31st, close of the spring gobbler season in Pennsylvania, hunters have the opportunity to target those birds beginning one half-hour before sunrise until one half-hour after sunrise.

While there is a time and place for all tactics to work, not all tactics work all the time. For that reason, there is nothing wrong with throwing caution to the wind and taking an aggressive approach.

Early in the season, subtle calling is usually effective to pique the interest of a gobbler, who is probably in the company of hens. In the late season, however, most hens are nesting, so a gobbler often responds to the aggressive calls of a hen still looking for companionship.

When setting up in the early season, moving to within 120-150 yards is advisable to avoid detection by a roosting gobbler. In the late season, however, heavy foliage and the cover of darkness allows for the option of setting up just out of shotgun range. Eric Baker of the Pennsylvania Chapter of the National Wild Turkey Federation is a frequent visitor to regional sports and outdoors shows, conducting seminars as a pro-staff member for Primos Hunting Calls on deer and turkey hunting. One of his tactics is to get just outside what he calls the “comfort zone” of a gobbler, which is usually within 75 yards of its roosting tree.

“For years we have been taught to be conservative when approaching a gobbling bird, and never get closer than 150 yards of a bird’s position,” Baker said. “I’ve learned over the years that getting into the outer fringes of this comfort zone can prove deadly.

“Keep in mind, if you can see him, he can see you, and you’re in trouble calling to a bird on the roost that is within sight of your setup because he will expect to see the hen. If he cannot see her, chances are good he will never commit to your setup, so it is important to remain just out of sight when choosing your calling location.”

Baker said one of the best tactics is to arrive at the roosting area early enough to circle it in the dark to set-up in a different location than usual. It is important, however, to have a decoy already set up before daylight so the gobbler can see a hen from its roost.

In the late season, using a decoy is effective, even with heavy foliage limiting the field of view a gobbler has from the roost. Chances are good that several hunters have pursued the bird during the season, so once it flies down and begins looking for the hen it hears, it is advisable to have a decoy displayed.

Some hunters use the tactic of simulating the sound of a bird flying down from the roost by slapping their hands or a turkey wing against their chest in the late season. This is especially effective when accompanied with a fly-down cackle and—here again—heavy foliage in the late season helps conceal movement.

Once this “hen” has hit the ground, beginning a sustained series of feeding clucks— accompanied by a few scratches in the leaves—is an effective ploy. For those who have problems doing this with a mouth call, a slate or glass call usually works better than a box call.

For those gobblers who have developed lockjaw and refuse to gobble, late-season hunting really becomes a test of wills. Chances are, the hunter who has the patience to wait out these birds will be rewarded with the sound of some mid-morning gobbles.

When this happens, take the same aggressive approach as when setting up on a roosting bird and get as close as possible without being seen. After all, in the late season, this business of taking a gobbler becomes personal.